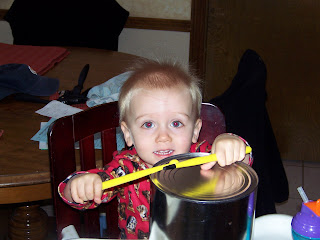 it's been awhile, huh?
just haven't had too much to blog about. i've been a little busy - not too bad. i have some new designs for spring that i'll have to show you. still working on them, but i'll show ya soon!
we've been doing a lot of singing around here lately. it so happens that hudson loves music. he got a drum & some drum sticks for christmas & if you've seen us since then, you've probably also seen the drum sticks because he won't put them down. my one rule is no drumming in bed b/c the crib is beaten up as it is with his old teething habits, but other than that i just let him take one with us where ever we go. it makes him happy :)
so he's starting to sing, too. the other day i woke up (clint was already gone) to hudson singing over the monitor - it was so cute, i can't even tell you! that particular time he was singing none-sense words + "mama, daddy", but he also likes to sing a song that says "shine, shine, shine, shine this little light of mine". his interpretation is "shy, shy, shy, shy".
his favorite lately is that song "obla-dee, obla-dah, life goes on nah nah nah nah nah life goes on." (well, that's how i sing it anyway!). we started singing it to him about a year ago when he would constantly babble something that sounded like "ohbahdee", which reminded us of the song. anyway, now he sings "ohbahdee, ohbahdee (then pause & scrunch up nose) nah nah nah". it's too funny!

happy weekend to all!
Posted by kelly at 1:49 PM

so cute! glad you are back - i have been missing the posts! jayden and hudson can have their own little band. hudson on the drums, jayden on the guitar and maybe both as singers because little j loves to sing as well. we don't have words just a bunch of babbling.
hope you are well!