okay well, mimi's driving me crazy again to post something new. i believe she wrote something to the effect of "i know my grandson does about 10 million cute things an hour & i want to see them" followed by a plethora of exclamation points (or "ex-lation points!" as their known around here - hudson is into punctuation these days).

the problem is that i just don't have much inspiration to write. or rather, i have about 10 posts already started in my head, but they haven't been developed. i believe the technical term is something about the baby taking all of your brain cells, but i'm not really sure...
and on that note, this was one of the things i thought to blog about this week - how i was writing in my journal about this pregnancy taking more out of me than i was expecting. the funny thing was that i realized i feel the same way about being a mom!! i don't think anyone can prepare you for the giving of yourself that goes into motherhood. of course, the flip side being that the darn little things always end up giving way more than they take, but you don't always remember that in the middle of the poopy diaper. i'm so very thankful to be a mom to hudson & now to this new little one & i'd never change it for the world, but it has been a most incredible challenge!
didn't some guy talk about loosing your life in order to find it?? :) (maybe mary taught him that one!)

okay, & i also wanted to post on how the other night clint & i were putting hudson to bed & he picked out this book called "My First Word Book" that can get rather lengthy as he often likes to talk about each item on the page. clint quickly said "oh, how about another one?", hoping to divert his opinions, but hudson quickly clutched the book to his chest and announced, "but First Words, i love it!!!". how could you argue with that?!

well, that's really all i can think of @ the moment & i've got to hop off of & go get things ready for small group. we're having crepe night, ala clint harp! YUM!

but i will leave you with a few pictures, because we all know mimi, that's what you're really here for :) 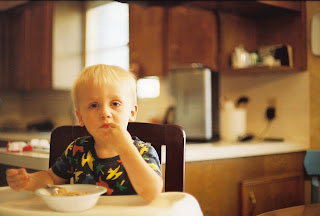 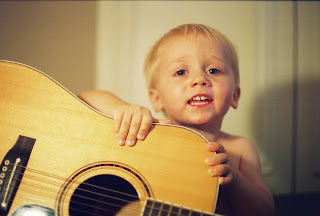 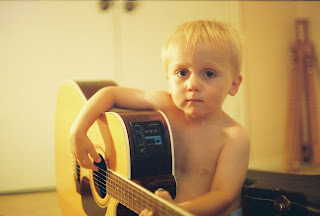 **these were taken with the new camera (except old, old - 1960s) clint got off of ebay. i'll have to tell/show you more when i find rest of them on the computer...

happy thursday to you.
Posted by kelly at 3:43 PM

That camera must be AWESOME! Those pictures are fantastic. I love the last one. Hope you are doing great! Tell Clint hello!

i was thinking that looked pictures with a new camera. what kind is it? love the sweet pictures of hudson and the guitar! him and j will have to have a concert together next weekend. thanks for your sweet comments. can't wait for you to hold little d!

Love the pictures. What kind of camera is it? Hudson is just so cute.