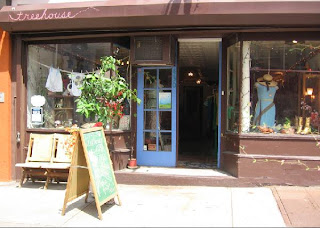 okay, so this is treehouse in brooklyn & if you look carefully & strain your eyes, you can see that the 2nd onesie in the left window is an alacrity creation!!!! yaaaaay! so fun! wish i were going up there to see it!!!

and in other news - idol! is everyone as shocked as we were?? archie is totally a cutie & is super talented, but we were so excited that cook won!!! i thought archie was cute from the beginning, but as his cheesy ballads wore on, i decided he'd be a great cutie for a teeny bopper to love (wholesome & sweet), but i wouldn't buy a cheesy album of his. and as far as cook - it took me awhile to get on the bandwagon. i really liked michael johns at first, & also i thought cook came across as kind of smug. did anyone else think that?
i think he just came across the wrong way b/c i don't think simon would say he was such a nice guy if he didn't mean it. & i LOVED the collective soul song! can't wait for his album to come out! but i hope it doesn't have that really ridiculous 2nd song from tuesday night - i don't know why they make them sing those dumb songs!

anyway, what will we do with ourselves this summer????

ps - it's totally embarrasing that i just wrote a long post about american idol. and i could have written much more!
Posted by kelly at 11:01 AM

kelly! your designs are so cute and really taking off - from the window to the internet - they are everywhere and i am so happy for you! glad that we could be instyle with sailboat design!
love you!
christy

oh i screamed when cook was announced winner. i like him alot but I am so cheap I doubt I will buy his album:) and congrats on your design- you rock!

American Idol nerds rule!!!! We must band together.

as you saw, there is no shame in long a.i. posts. thanks for your comments. i put another pic of my first pillow up. it's the one that took forever. yes, it is amy butler. so are the ones on the sofa. i like her fabric a lot. great to hear from you! i like your creations.