a few of my favs 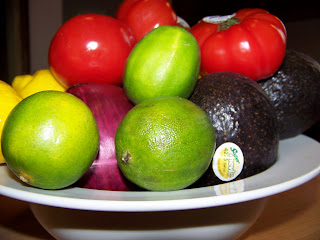 one of the things that makes me the happiest is a bowl of pretty vegetables. i wish i could say these came from the farmers market. but ruth & i are venturing downtown to a veggie coop this week, so hopefully i'll have a bowl full of locally grown soon!

so what are we doing with these? the red onion is for our turkey burgs (have you tried ground turkey? it's really great - you can substitute if for almost any ground beef dish.) the lemons are for a leek-lemon stirfry - easy & yum! & the tomatoes, avocados, & lime are for clint's famous guac (okay, well he just came up with it a few weeks ago, but it's really good!).

i don't know if you can see in this pic, but the tomatoes are "heirloom" tomatoes. i've learned about these & tons about locally grown produce, etc. from a new book - "Animal, Vegetable, Miracle" by barbara kingsolver. it's a great one. i was really in need of a good read, & ran out to get it one day. that's a story in itself, really - my desparate run to sam's (i knew the book was there & i had a giftcard) in my pjs w/ hud juice perpetually on the left shoulder (hud juice is a daily mixture of drool, milk, sweet potatoes, dried raspberries - or whatever else he has had to eat!). i realized on the way there that my sweet child (whom i had just thrown in the car, in my last minute dash, wanting something to read during nap time) was actually in his pajama top & no bottoms! i was THAT mom - the one everyone was wondering about, as in - can't believe she lets her child out of the house like that & just look at her! anyway, i got that darn book & enjoyed the heck out of it while hud napped!

and i'm still enjoying it's great mix of story/narrative & informative facts. it's primarily a memoir of her family's attempt to spend a year eating only what they could farm themselves, or buy/trade from their neighbors & farmers market. so, obviously they ate what was in season, which made me realize i don't even know what veggie/fruit goes with what season! do you??! the idea is that if you eat locally, the food is fresher, you're supporting your local economy, & elliminating the need for all of the fuel it takes to move those california tomatoes all the way to maine so people can eat blts in march. make sense? anyway, it's a great read if you're looking for something.

and some of my other favorite things... i've meant to blog about this for awhile, hoping to rock some of your worlds...

now, i don't know about the body wash, but this lotion is THE BEST!!! i've been on the look out for a good lotion for years & have always come up dry (haha!)! but this one has not left me hanging. it smells nice & actually keeps your legs from getting scaley hours after your shave - nice! it seriously makes me happy.

hmmm, other fav things - m&ms, reeses... but you know that! one of my fav none chocolate deserts (which have to be good if i'm going to indulge in something nonchocolate!) is a blueberry peach crumble. i'm making it tonight, so i'll try & take a pic. it's YUM!

a few of my favorite things -
1.a good morning run
2.coffee with a dear friend & meaningful conversation
3. happy hour at chuy's
4. anthropologie
5. getting to be apart of new experiences for jayden
6. people walking in freedom
7. my sweet family and spending any time with them!
8. baking desserts and sharing them with people
9. hosting people over for dinner
10. abiding in the vine

you know i love coffee & also anthropologie!!! i also like a good run, but not always in the morning :)

hope we get to connect when you're here!