now or never. nyc, here we were!

i just want you to know that i'm completely aware that's it's ridiculous to be posting about the nyc trip a month later.

but i want to have a record of the trip & since i gave up scrapbooking years ago, this is IT
besides, we had SO much fun, i have to share.

day ONE -
mission: survive the plane ride with a 2 yr old, catch a cab to johnna's apartment, eat a yummy dinner & prepare for the rest of the week. mission accomplished with no pictures.
oh, & we brought dessert home to eat while we played spades. jonty & mom kidded johnna's & my butts.

alas, Treehouse was closed (we went back another day) so we had to eat pie. yes, that's right we ate THE BEST apple pie right there in the big apple. can brooklyn be considered "the big apple"? johnna, please advise. 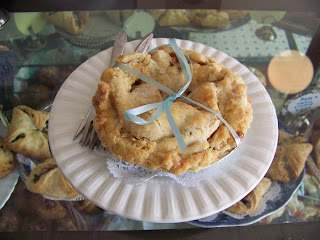 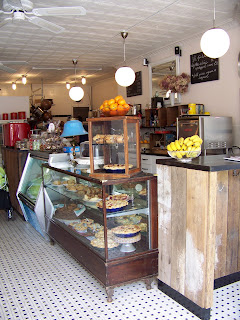 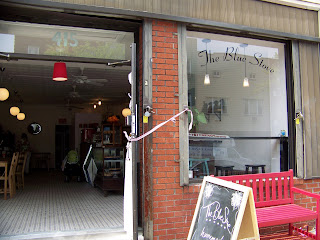 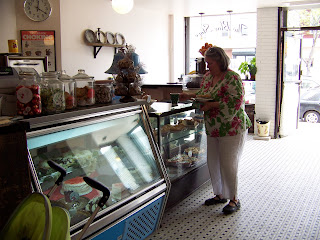 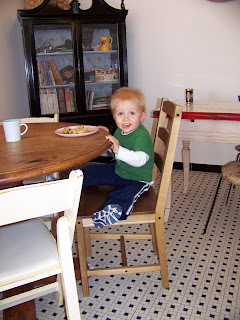 ***here's hudson busy charming the place :) we loved how she mixed old furniture, dishes, silverware. everything was mix-match & just darling.

the blue stove. really, it was so cute. this girl just loves pies, so she opened up a store & that's what she does - pies. i love it. there seems to be a lot of that type of thing in brooklyn - new little shops (we also liked brooklynski) mixed with old.

we experienced the old before our pies when we ate @ a little italian deli. while the food was really good, the best part was hearing a couple of nyc firemen talking. one ordered a "meat ball saaaaandwich" & the other started in with a story, "so i toll huh..." (so i told her.) classic. another fun part was that we sat out in the courtyard (aka the italian family's backyard, since they live on the top 2 floors) & ate our delicious italian fare while watching their laundry dry in the breeze. 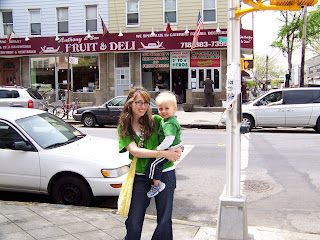 after such a great lunch, hudson fell asleep in the stroller, so mom & i strolled along the streets, letting him snooze & just enjoying the beautiful weather. i'm so glad we got to spend so much time in brooklyn - it's not really touristy at all & we got a really good feel for what normal life is like for people there. we strolled through parks & up to a church & finally caught the bus back. & that really was a fun experience, too. so MANY different kinds of people both on the bus & off. we went through several neighborhoods including an old orthodox jewish neighborhood. that was totally fascinating - seeing basically every single male dressed all in black (suit to hat) w/ beards & long, curly forelocks. women all had some type of hat/turban/head covering w/ long black skirts. & almost every sign was in hebrew. i had just finished reading the chosen, set in that very area of brooklyn, so it was especially interesting to see!
back in johnna's brooklyn neighborhood, we met up with clint's sister, suzanne & her boyfriend, mitch for some playground action @ park slope. 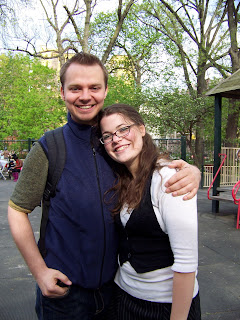 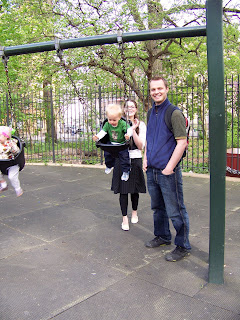 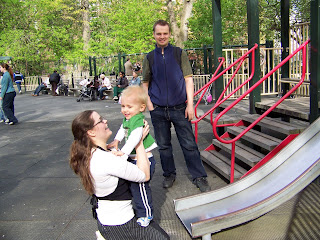 hudson loved getting to swing & slide with aunt suzy :) afterwards we ate at a yum greek place. i loooooved the hummus & pita bread, but i could have done w/o the falafal. i had been feeling all adventurous & wanted to try it. um, not my fav. hudson really enjoyed the greek restaurant though. they had something called... oh, what was it??! something really ethnic... oh yeah, they called it "chicken nuggets"!!

mission: take the subway to work with johnna in the financial district & lunch @ madison square park 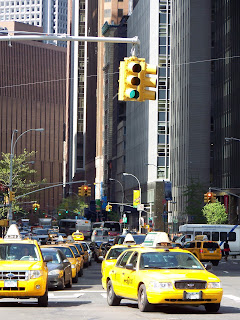 it was fun to see what johnna's normal commute into manhattan was like. she took us to a fun little coffee shop close to the water & then skipped off to work for the morning. mom, hudson, & i drank a little coffee with a muffin & we were off. with a couple of stops on the way, we made our way to the world trade center site. there's not really much to see, but a HUGE, massive hole in the ground (both deep & wide) with crazy amounts of construction going on. you can peer into the fire station that is right there (& was a part of the first responders). mom & i were surprised @ how emotional we got looking @ pictures in memorial of the 5 or so firefighters that gave their lives in the tragedy. whew, i could get emotional now :)

so if you're feeling kind of emotional, you should probably shop, which is what we did next. i had to get an fdny shirt for clint & then we headed to century 21. have you ever heard of that store? because we hadn't. we just happened upon this huge department store full of discount designer clothes, shoes, appliances, bags... everything you'd find @ saks or dillard's. it was a crazy shopping experience & we could have done some major damage without a certain little 2 year old who wasn't too keen on the whole shopping thing. i'm just saying i WILL go back one day :)

next on the agenda was that lunch w/ johnna & her boyfriend, jonty (whom we all love!). one of jonty's favorite places is a super yummilicous hamburger place in madison square park, called shake shack. the place is soooo good that the line to order is constantly super, super long. so, i let the others enjoy that long wait with i strolled the sleeping toddler around the beautiful park! it was just what you'd expect of a springtime stroll in a park in nyc - crisp weather, pigeons, cherry blossum trees, big buildings all around... 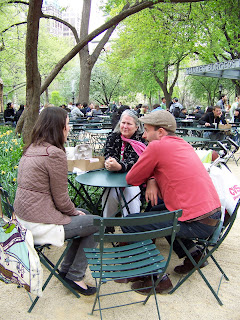 the burgers were great.
and by the way, we know johnna's pretty crazy about jonty solely on the fact that she wanted to go to this burger joint because it's jonty's favorite. she's a vegetarian :)
walking around the upper west side (or the lower east - i can't keep them straight.) 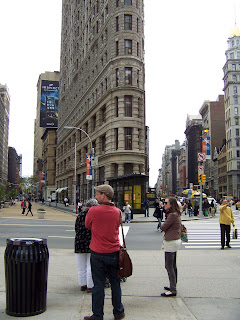 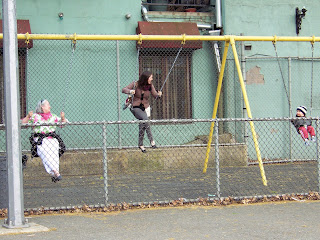 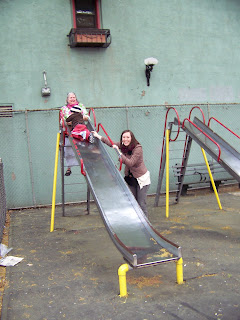 on to a pit stop for us!!!
tonnie's minis
what kind of name is "tonnie"? i'm really not sure, but he/she can make on mean cupcake. 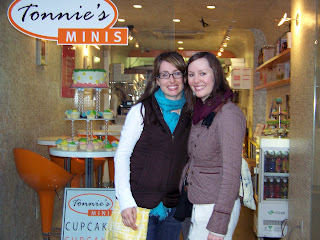 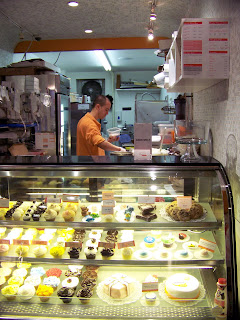 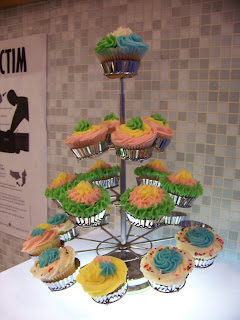 besides the fabuloucity cupcakes, this neighborhood also has loads of fun shopping. johnna found a great dress @ one of the stores. she & i shopped while mom had to go back for another minicupcake for hudson. i had thought one would be enough for him, but apparently while we stepped into the shop, hudson shoved the cupcake in his mouth & stretched his arm up to mimi shouting, "cake!" with his mouth full! being the good mimi she is, she went back & bought that child more cake.
here he is choosing his flavor... 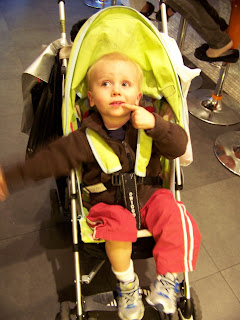 that night we ate cupcakes & talked politics & everyone walked away WITH their heads intact! it was a good convo :)

i really can't remember what we did first. all i remember is the pizza. all mom remembers is ted dansen. yep, we saw him on the way there, fufilling mom's one nyc wish - to see a celebrity.

on to the pizza 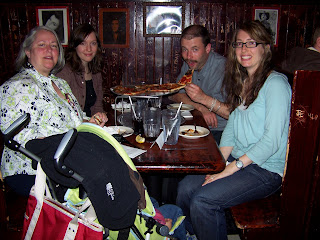 oh my gosh, it was good. cheesy, hot, greasy - mmmmmmmmm.
we had the waiter take about 17 pictures & none of them were good! we laughed so hard about it! so i just chose the one that was best of me. sorry guys, it's my blog!!!
if you're wondering where in the world is hudson san diego (get it?). that's when we left him in the cab. just kidding! he's in the stroller taking another snooze. boy, did that child miss out on the good food. 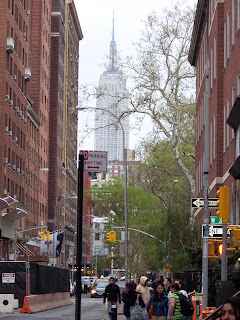 a little more walking & then back to brooklyn to see treehouse again. we sure did go back to the blue stove for more pie, too :) of course being the awesome business owner i am, i got NO pictures of treehouse! bummer! i was actually waaaaay too busy meeting wonderful Siri & searching through their awesome selection of vintage + new stuff. i got a super cool vintage necklace & some cool handmade cards. johnna got a dress & mimi bought hudson a really cool owl tshirt for his birthday
that was when we thought we needed to head back to get the airport. long story short, our flight was canceled, so we were back to the city that night for another round of fun.
this time we stayed in midtown @ the helmsley... 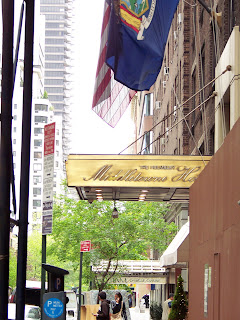 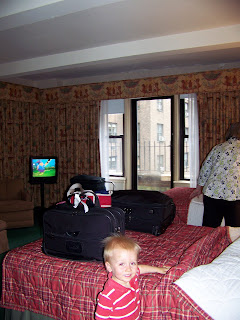 we don't know if the hotel has a connection to the infamous leona helmsley, but we really hope so because that makes for a better story!
while having your flight canceled & all that entails is really not fun, the extra day ended up being a total blast! 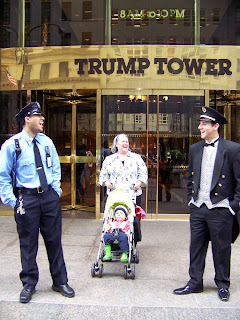 and after a street fare where i bought impossibly cheap tshirts (what clint, yours already has a hole in it??!) & some street food, we made it to the carousel in central park... 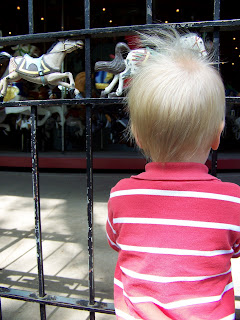 the stuff of boyhood dreams. 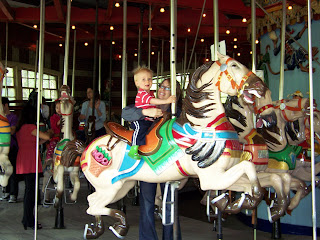 he was in love.

and shockingly enough, that concludes our nyc tour.
i could tell you about the plane ride home & how we ran out of diapers & how hudson went commando for the last 2 hrs home. but i'll save that for another day.
i think i've said quite enough.

oh, except THANK YOU, MOM for one of my ALL TIME favorite birthday presents ever :)
Posted by kelly at 2:51 PM

this whole story was uh-mazing! Hudson with the cake = presh. Clint told the no diaper story and I laughed out loud about Clint's shirt already having a hole in it.

loved hearing about your trip! sounds like you guys had so much fun. you are going to have to give me more details about the no diaper plane ride!
(now we need pics of hudsons bday!:))

you look awesome, kelly. What a fabulously fun trip!