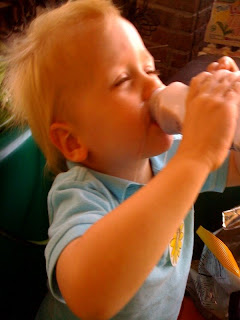 hudson had his first experience with chocolate milk last week & as you can see, he throughly enjoyed it. he was doing a good job just sipping it until i took my hand away to snap the pic & that's when he tilted the bottle & chugged it! funny guy.

he's been asking for "choc milk" ever since & i'm not proud to say i've already bribbed him twice with it. the lows you'll stoop to as a mother :)

the latest choc milk bribe was this morning. we had to wait in what i knew was going to be an intense line in a government office (oh joy!), so being the stellar mom i am (heehee), we went by chickfila & got chicken minis & choc milk to eat in line. that lasted the first 15 mins & then we went for various toys, talking to strangers, & ended with a good 15 minute stint with elmo on mommy's phone. i was feeling pretty good about hudson's waiting skills & realizing we'd been waiting for over an hour, when we got in to see the lady. that's when all hell broke loose as she explained to me that we needed to come back wednesday. WHAT???? you've GOT TO BE KIDDING ME! i just endured what in total was an hour & a half with a 2 yr old in a stroller & you're asking me to come back AGAIN??? i won't go into the details, but let's just say she was less than helpful & when i tried to ask polite questions, said "i know what i'm doing, i've worked here for SEVEN years." neat.

i was wishing clint were there - he's really good @ negotiations in those situations, whereas i just waver between screaming @ the lady or bursting into tears! i did neither. well, on the outside anyway because on the inside i was definitely yelling "have you ever had a 2 year old????!"

so that's where we'll be on wednesday morning - @ the happy government office, living it up. & YES, there will be another choc milk bribe :)
Posted by kelly at 11:49 AM

Email ThisBlogThis!Share to TwitterShare to FacebookShare to Pinterest
Labels: hudson

what shady "government office" were you hanging out in?!

that's what i was wondering...why are you going to the government office!? mere :)

i hope your experience on wednesday was better at the government office - did you get what you needed?