the harp family journeyed up 45 this weekend to see some of our much missed friends! even after 2 yrs, i still miss living in dallas. mostly, i miss our friends & also just the familiarity of the big d. i can still navigate dallas about 10x better than i can houston. i basically have little to no idea as to how to get around in houston much farther than our little neighborhood! thankfully we do have some good friends here, or i might have had to hightail it back :)

first stop - the blue goose. really, i challenge you to find better fajitas. it's our absolute favorite mexican food place EVER. mmmmmmmm. i forgot my camera, though so jen - send me those pictures!!!

next stop - the ogden's house. hudson & jayden got to play around while we ate ice cream & saw jordan & christy's new renovations on their house - they look great!

home to jen & patrick's house - the haney's routinely let us crash their house & we're so thankful :)

saturday morning - einstein's (HOW can houston not have an einstein's???) with jen, v, deany (whose house i finally got to see & love!), christy, jayden, & duncan (who wore his cutie whale onesie just for me!). hudson & jayden traded various lunch items & had a lot of fun... 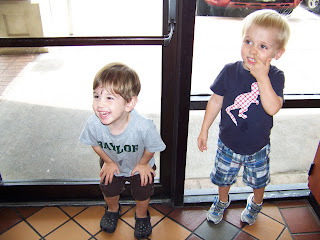 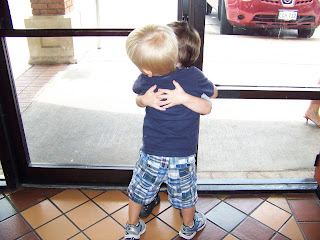 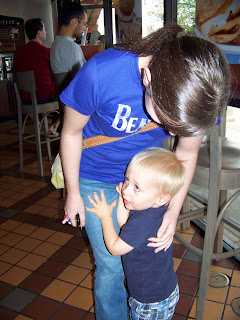 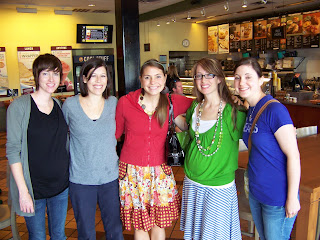 on saturday night, clint & i had a work party to go to & let me make a side tangent to comment on the meaning of "snappy casual". i researched "snappy casual" (google, naturally) & found that it meant jeans were appropriate, but needed to be trendy. so i decided we should wear our darker jeans & cute/dressy shirts (not sure i can call clint's gingham shirt "trendy", but it was definitely trendy for him!) & i felt good about our attire. the hosts were wearing similar outfits, but almost everyone else had on dressy stuff! so, if you run into this predicament, be aware - "snappy casual" = trendy jeans & cute, trendy top, but you might want to go a little dressy to blend in!
now do i have a picture of us in our snappy casual attire? no! we seem to have this block about taking pictures of ourselves!
but i do have pictures of hudson's pizza party with uncle p, & aunts jen & v... 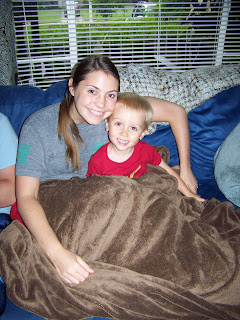 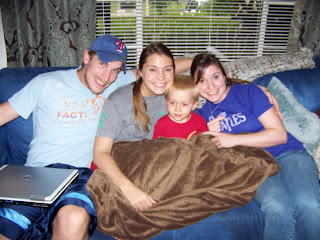 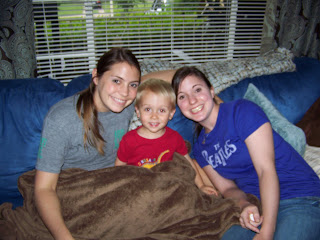 it's safe to say hudson had a pretty fun time - pizza on the couch, cupcakes, unlimited dvd watching - he was pretty spoiled!

on sunday, we all went to legal grounds for breakfast - Y U M is all i can possibly say about that. wow.

and then it was time to head back to h-town & the humidity :) & now i'm catching up on laundry & groceries & all that kind of stuff. i also need to make some hummus for the week & sort through some girl clothes we already received from jaclyn (yaaaay!!).

hope monday's treating you well!
Posted by kelly at 1:36 PM

Sad we missed y'all this weekend! Congrats on a girl! So exciting...Emery Kate will have so much fun with her :)

So glad you're having a girl! it's FUN :) I would have loved to have been at that Einsteins breakfast...miss all of you!