we pretty much loafed around this weekend.  if not for a friends' birthday party, we wouldn't have left the house.
sunday i was suffering from some major january blahs.  so rainy, so grey, so blech.  so much i needed to do, not much i wanted to do.  bad combination.
i headed to the kitchen, figuring laundry & vacuuming would be more tolerable if i could do them in between cooking & listening to npr.
turns out i was right.
& sunday turned out not half bad.
especially when we ended it with chocolate cupcakes... 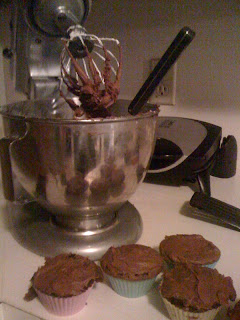 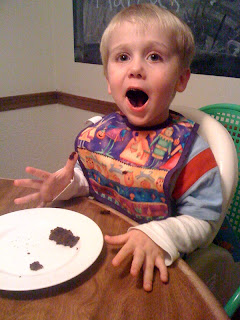 other weekend activities included...
watching inception.  have you seen it?  don't try & multitask on this one.  don't even try to eat popcorn.  it totally messed with our perceptions of reality while making for some really good convo.
a lot of npr listening
making super hero capes for our birthday gifts (did i get a picture?  NO.  booo.)
making the chai i talked about last week.  highly recommended, btw.
some embroidery from the book c gave me for christmas
cooking - 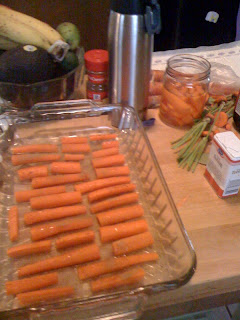 carrots for baby food (& guess who came up & snagged a raw one to naw on???  i was SHOCKED, but totally acted cool.)
cupcakes
another batch of applesauce (this time with papa harp on child duty)
p-dub's tortilla soup - i was distracted & put in too much chili pwd - oops!  then i forgot the lime.  other than that it's decent, but not the stellar performance i was looking for.  still on the prowl.  will try virginie's next...


happy monday
Posted by kelly at 9:04 AM

Email ThisBlogThis!Share to TwitterShare to FacebookShare to Pinterest
Labels: weekending

We went to a bday party too this weekend and Olivia cried because she didn't get any presents. This reminded me of Hudson's first birthday when Caleb was 2 and we had to leave during presents because he was crying so hard and wanted them all. At least that comforts me to know Olivia will grow out of present envy:).

i love that hudson stole a carrot and you just played it cool. such an experienced mommy :)