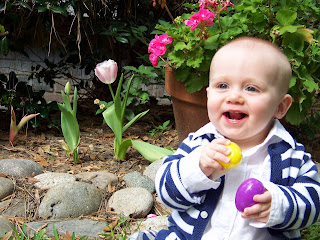 first of all, we hope you had a happy easter - hudson did! & i was happy we had a few tulips to take a picture with. this season was my first to plant tulips.
i'm one of those people i hate! those people who don't post for a whole week!!! i don't know that anyone reads my blog as often as i read some people's (who shall remain nameless!), but it drives me nuts when those people don't post for a long time & look - here i am doing it!

well, i've been quite the busy bee this past week w/ alacrity designs! i've had lots of orders & have truly been working my fingers to the bone. it's been a lot of work, & a lot of fun. i've definitely felt like a working mom this week - how do you guys do it??? my mom worked all through raising me & my sister & i continually tell her - how in the world do you do it??? anyway, we've been surviving on take out food & living with dirty floors & in between piles of laundry (mostly clean & folded thanks to clint!). last night i couldn't take it anymore & had to run to kroger to get stuff to make spaghetti - nothing fancy, but we needed a decent meal!!!

anyway, that's been me lately - late nights & sleepy eyes. last night we went to bed kind of late again (i don't even know what time - we try to not even look anymore.) & then hud woke up at 5:45 AM!!!!!!!!!!!!!!!! ahhhhhh! lately he's been waking around 7:30, so this was a major surprise. by surprise i mean horrible, awful thing that you don't expect... anyway, needless to say we were exhausted. thankfully he played in his crib for quite awhile, but we couldn't doze well b/c he's a very talkative player & that was coming over loud & clear on the monitor. if you know me, you know i'm a girl that needs her sleep, so i was barely among the living as i drug myself out of bed this morning to greet my oh so cheery baby! anyway, i made it through breakfast & playing a bit & finally it was time to put him down. i then crashed on the couch. i've come to hate taking naps during the week b/c i have such precious little time to myself & so much to do, but this morning it was not an option. anyway, i woke up an hour & 1/2 later to happily awake huddy over the monitor. again, i felt half alive & drug myself to his nursery.

anyway, i'm going to spare you the details of my horrible attitude at this point - i was just so tired - it's been such a long week & really, no nap was going to suffice. the nice thing about hud is that he is so cheery & SO happy to see whoever come to get him in his room, that it's hard to stay grouchy when you go get him. so that helped. & somehow in my grumpiness, i heard the word "thankfulness". i dont' know how except that ruth & i were talking about it on saturday, so maybe that's how it came up. anyway, a miracle occured - i decided to start thinking of all of the things i'm thankful - hoping this would save me from myself & save hud from grumpy mommy. i started saying them out loud while i wrangled him (this is what you have to do lately in order to change his diaper, or clothes). i kept trying to think of things i'm thankful for through our hurried lunch where he gagged again & i panicked - thankfully no throw up! (we have come to realize that our darling son has a very sensitive gag reflex - most anything solid makes him gag & possibly puke - even a small piece of fruit from yogurt - fun times!) and suddenly we found ourselves in the car, running our errands & i wasn't in all that bad of a mood! miraculous!

we had a good time @ target, even though they didn't have the ONE thing i was needing & haven't had it in a week. & i even stayed somewhat cheery when i let this family go ahead of me in line & they weren't even that thankful for it. yaaaay! next came the DREADED post office - i've dreaded taking hudson there to the dirty place & the line out the door. ahhhh! & i needed to mail 4 separate packages, which is stressful enough & it's always ridiculously expensive, which makes me so mad. anyway, miracle upon miracle - grumpy kelly did not return!!! yes the line was long, yes hud became anxious & tired of the stroller, yes i was totally confused & didn't know which envelope or box would be best for which package, & YES it was way too expensive, but i don't know people, i just made it through without screaming or cussing someone out in my head!!!

okay, all of this to say that yesterday we celebrated the resurrection of jesus - truly the ultimate miracle. if i'm being honest, which i try to be, i sometimes dont' know why i believe in this. it's crazy - a man, god, raising from the dead? seriously? but you know, that's what faith is - believing something you cannot explain. and as crazy as it is, & hard to understand, i believe it. i believe in the miracle of jesus coming to earth & bringing with him the coming of the kingdom of god. i believe that means he came so that we could understand how to live this life - how to bring about the kingdom of god. & i believe that's our purpose, to live out the principles of the kingdom of god here on earth. we are blessed to bless, as god told abraham. i'll write more about that another day, but today, i feel like the miracle was that i got past myself for a second, & got to maybe be a part of the kingdom of god. instead of adding to all of the negativity of this world, maybe i added something positive by getting over my bad attitude?!!! i hope so.

and talk about miracle, we got our car stereo fixed!!!!! let's see, it has been 7 months of silence in the harp mobile. yeah, it's been tough, but it's really been good - i had gotten used to it & realized that music in the car is a nice thing to have, but not a necessity. this was nice to come to realize - again, getting over myself. but it's really great to have it back. clint dug out an old rich mullins cd & we've been listening to it. honestly, i personally don't like most christian music & rich is certainly not "cool", but there's something about his music that seems really pure & if you know much about how he lived his life, it makes up for the cheesy songs. anyway, it's been really good to hear some of the music & think on it.

if i have time later (which i probably won't!), i'll type out some of the lyrics to one of the songs i've really appreciated lately.

okay, is that enough rambling??? i'm happy to be back.

good day to you all.

***alacrity designs news - i'm out of commission this week, but will be back in business next week! my "special deal" for friends & family (and blog stalkers!) is buy a $22 onesie off of my website & i'll include a matching burp cloth (coordinating fabric down the center w/ rickrack borders) & wrap it in a clear package w/ ribbon. it's a pretty darn good deal if you ask me! several people are stocking up on baby gifts for a good price. this offer is good through april 15th, just email me after you purchase & tell me what size & also that you want "the special deal"! also, stay tuned for more creations...!
Posted by kelly at 2:00 PM

Starting a new business and being a mom of a little one in themselves are HUGE jobs. Never mind being a wife, friend, blogger :)...so don't be so hard on yourself, for sure! It won't always seem this hard to juggle things as Alacrity takes off more and more.
I am a HUGE fan of the cheese of Rich Mullins. I really love the depth and grit behind his lyrics- it truly is worship to me- even when I don't understand what he is talking about (like the badlands and Nebraska and nature stuff.) He is an artist that is timeless-- even though he is a throwback, it is still so relevant!! Glad you like him too! props for Rich!

okay, is it nerdy that i'm commenting on my own blog?... yes it is. but i just want to say - how cute is that little guy??? i mean really - he's such a cheery little one & i love it. and those little nubs of front teeth!!! i can't get over it!

i know, everyone feels this way about their own kids - it's wonderful, huh?!

God is so good. I love what Graham Cooke says, "God is good. Every day is a day of grace. We either are given grace to endure or grace to enjoy." I am glad that the Lord gave you grace to endure the hard days and pray that you are able to enjoy the fun days! I am glad your business is doing well. Have fun in GA! Hudson looks cute in his easter outfit!

Can you shoot me an email? I can't find your address but I have some Etsy info I want to forward you. This is easier than spending 20 minutes looking for it!!