i wore my assets to austin this week.

did i get a picture? oh, no. but i got a few of a certain cutie that accompanied mom & i on the trip... 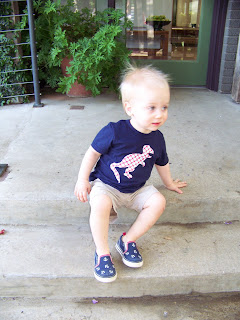 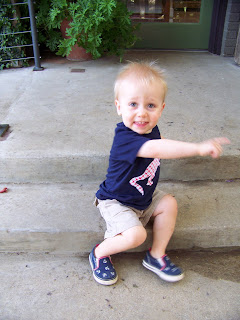 hudson charmed the city while mom & i did a little alacritydesigns sales. we stayed at hotel san jose on south congress ("soco" if you're hip). it was a real treat - more $ than we'd normally spend, but totally worth it. we'd visited before b/c johnna (when are you going to move back??!) used to work there, in the coolio courtyard/bar area, but we had ever stayed. it's so fun & funky. the rooms are small (which doesn't make for the best of sleeping arrangements w/ a little one), but the ambiance is modern + old school (it's a renovated old, old motel), clean&neat meets austin hippie. plus they had a fish pond, which won hudson's heart. 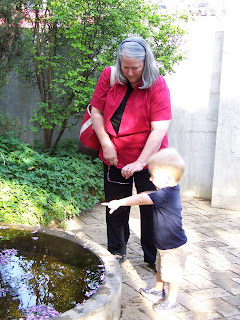 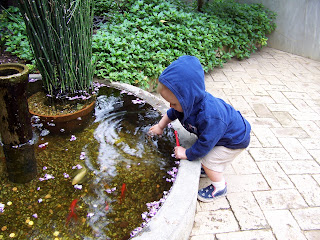 and here we are eating at magnolia cafe. two words - AH MAZING. we ate there twice. (another fun thing about staying on south congress - you can walk to tons of shops & all of this good food.) 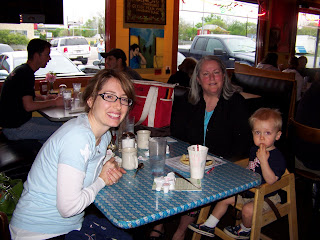 you may notice that hudson has the same outfit on in every picture (a new alacrity t-rex shirt). well, that's because he was such a good sales tool on the first day, that i decided just to put him back in it the next day, too! plus somehow he spent about 8 hrs wearing it the first day & didn't get it dirty, & i consider that a modern day miracle!!!

we also talked with will @ kid genius (also on soco) & hope to do some t-rex shirts there, too.

lastly, alacritydesigns proudly joins the lines @ picket fences in north austin! what a fabulous baby store! seriously, kathryn knows her stuff. it's a definite MUST STOP!

while in austin, we also were able to pop by & see brand new baby, stella marek! she's really one of the most gorgeous newborns i've ever seen, complete with the sweetest newborn scent! awwwwww! i can see "alacrity model" in her future for sure! congrats ry & suz :)

what a fun trip, though we weary travelers were quite happy to reunite with our beloved daddy :)

ten thousand villages - super cool ethnic artsy stuff from all around the world & all fair traded!

hey cupcake! - yummmmmm is all i have to say. oh, & order the vanilla dream.

Oh Kelly, I wish I'd known you were here but sounds like a pack-filled trip! Hotel San Jose just looks amazing --that's where Brad Pitt stayed while filming a movie here recently (fyi) so you go with your celebrity taste! ;) "Hey Cupcake" is owned and was started by one of Kyle's high school friends...how wild is that?! Go with your alacrity designs...you rock, mama!

I LOVE the navy shirt with the t-rex. It is perfect for a little boy! Fun to hear about your trip!

im so jealous! congrats on the new customers!

Girl, I just know you are going to be so famous one day. You are so creative and driven.

I really want to get the baby an outfit. I know we have talked about it before. I think I'll just head over to your online store and place an order, umkay?