i'll post!
i do think i've broken a personal record this time for longest time not to post.

but i do have a good excuse.

and if you're not friends with me on facebook, then maybe you'll be surprised to find out that... 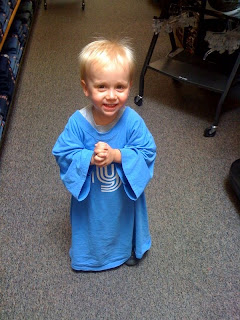 this little guy's prayers have been answered & he's going to be a big brother!

yes, i'm almost to 9 wks. we went to the dr today & were able to see the little peanut & his/her little heart thumping wildly - what a blessing.

*and as a side note i'd like to say i absolutely adore this picture. i can't look @ it with out totally cracking up. the story is that we were doing a little family shopping during the fourth of july weekend (because, really nothing says "happy fourth!" like family chickfila minis for breakfast & shopping later on!) & hudson decided he wanted to try on daddy's shirt while daddy tried on the other shirts. & voila - choir boy was born :)

and it was that picture of hudson that caused clint & i to realize that we had been out all morning sporting the same shirt. 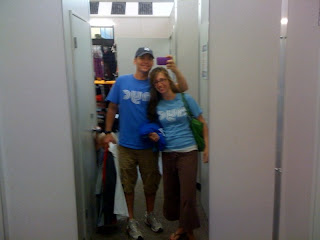 but you know, nothing says "happy fourth of july!" like going out as a family wearing matching shirts - especially in shades of blue - how very americana of us!

anyway, back to what you really care about - the baaaaaaabbbby (you know, how elaine's friend says it from seinfeld). 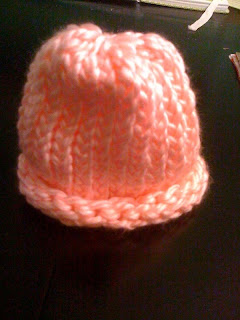 would you believe it if i told you we already know the baby's gender?
it's this state of the art, new test they have called your 2 yr old waking you up in the middle of the night & as you're laying him back down to sleep he says, "mama?". to which you reply a sleepy "yes?" & he says "...sister...". to which you totally freak out because it's pitch black dark in your house & you are getting goose bumps - especially when you realize that you have no idea where he even learned that word & you've never heard him say it.

so at least someone is buying it because when i got back to stephanie's house to pick up hudson after our dr's appt (did i mention how dear & sweet she is for adding another hooligan to her crew so we wouldn't have to wrangle him while being sonogrammed?), she had whipped up this PINK hat for the babe :)

so what do you think? would you believe such a premonition?
Posted by kelly at 10:19 PM

Ahhhh!!!!! Kelly, I am SOO excited for you. This just made my day. And oh my goodness, so crazy that he said sister! He must just know :)
Congratulations, I am thrilled for you. I hope you are feeling well! I REALLY want to get together soon, so sorry I had to cancel Monday. Let's re-schedule :)

so happy for yall kelly. and i will love it if hudson really predicted the sex! can't wait to see if he's right!

Ya! I am so happy for you and Trippy! I do think kids know... Annie knew the morning of the day I found out, and we didn't even tell the kids for 2 weeks after that! She has said all along it was a girl. So... I think you are having a girl too! We also did the Chinese calendar (which has been right with all 5 of mine) and now there is a test at HEB in the baby isle that can tell gender. I think it works like a preg test. You should try it! Congrats and hope you feel well!

Congratulations, Kelly! I totally believe Hudson. Sloan predicted Tia to be a girl. He insisted he was having a sister, even though the rest of us were sure it would be another boy because there hadn't been a girl in Lee's family in 5 generations. I was a fraid he'd be disappointed.

The morning she was aborn, a friend stayed with Sloan. When he woke up she told him I'd gone to have the baby and he told her that we were going to bring him home a sister. Turns out, he was right! Fun stuff.

yaaay kelly, so thrilled for you!

Okay, lady, I am friends with you on facebook and totally missed this news. CONGRATS!!!! I'm so excited for you guys and will pray for this baby. YAY, YAY, YAY!

On a sidenote, my mom helped me sew a dress last week...way too hard and frustrating. I will probably do more but it was hard!

and congrats on the clothing line too!!! you are one busy momma...growing a baby and a biz!

Love to you,
kelly

so excited for you guys! can't wait to find out if it is a girl or not. i think a little girl would be so fun to have! hope you get some rest! love you guys!
(ps - glad you posted - i get sad when you don't :))

Hudson is a prophet, this I believe.

Kelly! I am soooo happy for you! I hope it is a girl so Emery Kate will have a friend :)
We miss you guys!
love you and will be praying for you and the baby!
amy :)

That is amazing! I totally believe it and will be thrilled to a little baby girl wearing that pink hat. So wonderful....