getting ready for christmas

sort of.  i'm no organizational wizard or anything (ahahahaaa!!  like i needed to tell any of you that!), but a few years ago i figured out something about myself.  if i can start something earlier than when it technically needs to be started, i feel really good about myself, & will probably get the project finished early (hello halloween costume!).  if, however, something needs to be done immediately, OR if i'm already late in doing it, it will probably take an act of god to get me to actually do it (dr's appts, for example).

so if you're confused, basically i'm saying that i try to trick myself into doing things super early because it's basically the only way i know i will actually get it done.

& this is why i'm thinking (& posting) about christmas in september.

here are my current christmas thoughts/ideas...

family presents...  i'm talking extended family here.  last year i started really early (see above!) & we handmade a lot of our presents.  we even made our own wrapping paper with a huge roll of brown craft paper that hudson finger (hand/foot/BODY!) painted in red.  i definitely plan on doing that again, but other than that, i got nothing.  nothing!  i don't have the creative juices flowing yet for family christmas presents.  if i find some inspiration, i'll share.

traditions...
what i DO have inspiration for, is getting THIS book... 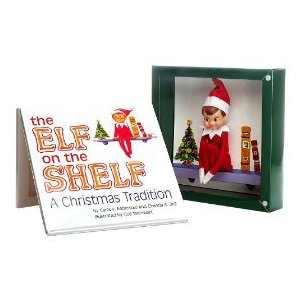 i think it will be so fun to do with hudson this year.  has anyone heard of it?  all i know is that you read the story (about some mischeivious elf or something) & then hide the elf around your house every december morning for the kiddos to find.  that sounds so fun to me!  i love the idea of little random traditions like that.

AND if you want to make your own elf (elves??!), i found a tutorial here.

crafty decor...
mmmm, well i think i'll make a christmas bunting banner like this one from my shop.  & also i'm contemplating another wreath.  i do have one from last year (in fact, if you want a fun holiday project, i recommend that post.), but can you have too many holiday wreaths??!

gifts for the kiddos...
i DO have a few ideas here.  one, i'd reallly like to make some flannel pj's for mr. h.  i already found the fabric - it's blue & has all of these cute & colorful happy little monsters saying things like "we're friendly monsters!".  he can wear them on all those frigid nights we experience down here in south texas.
also, clint & i have a little idea to make a play kitchen for hud & holls.  hudson is very much into "cooking" right now & we were thinking it would be so fun to create a little kitchen that's "gender neutral" if you get my drift :)  mommies AND daddies cook around these parts!  more details to come...
and then i thought of all of that cute play food i've seen around the web & how fun would it be to make some play food??!

in conclusion, i think i need to get busy on my holiday stuff NOW!

ps:  to keep me going, i'm going to try & do some kind of holiday post once a week until december.  if YOU have any ideas that should be shared, email me (alacritykellyATyahooDOTcom), or leave a comment.
Posted by kelly at 9:19 AM

Email ThisBlogThis!Share to TwitterShare to FacebookShare to Pinterest
Labels: christmas

Fun ideas! I've heard good things about the Elf! :) ...Question: We were going to get those Paul Frank rainboots for Quinn, bu I wanted to ask if they were true to size?! Sometimes rainboots run REALLY big!

We have Elf on the Shelf and have had it for several years now. The girls LOVE it. My only problem is remembering to move him every night. This past Christmas there were many mornings when the girls found him in the same place. I had to think of many excuses...he fell asleep so close your eyes and I will wake him. Then you can go find him b/c he will be moved. Ugh...that's the hardest part, but other than that it's so fun!!!

omg, jennifer that's too funny! haha! unfortunately, that sounds EXACTLY like something i would do! i'll have to leave myself a sticky note or something... :)

ok, if I had any sewing abilities, or more $, I wish my kids could have matching holiday pajamas. I thought it was so cheesy before, but now I wish they did. And in re: to the kitchen. Scott bought parker his when he was 18 mo old and it has been played with literally every single day for the last 7 years by both genders. Great investment! Also there are some great advent story books where you read a chapter a night in anticipation of Christ's birth.

we have the elf on the shelf and LOVE him. kens named him "sugarbuggy" and she has asked all year long about him. i have to say there was a big turnaround in her attitude and such when she knew about the elf and everything that he can do. it really is fun! we even busted him out the week before Thanksgiving and will probably do the same again this year....it is great with the 3 year old crowd and such a fun family tradition!